I used to be a “sneaker head”. I remember my first high-cut pair of shoes from adidas which my mother and I got in an outlet shop back in 2009. It’s the blue and orange one I’m sure you’ve seen me wear in college. I loved it!

My mother then got me a pair of Nike shoes in the same year. It was peculiar. She gave me the Andre Agassi Nike Air Tech Challenge Hybrid. It was nice, had edge, but it looked too sporty for a not-so-sporty guy like me. Still, I wore it because it was comfortable, and unique. I never managed to take a photo of it, so I grabbed an image from the NikeBlog.com. 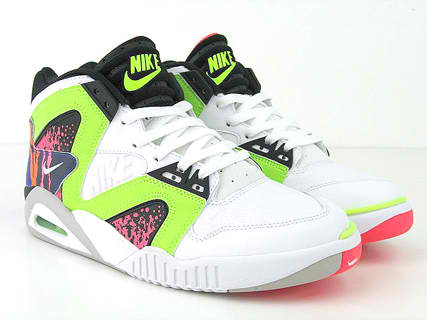 That whole Freshmen Year in College actually got me into buying sneakers, mostly because my guy blockmates were really into shoes–and in general, sneakers were in from 2009-2010. I got a Vaider Hi Duct Tape Supra for Christmas, and a Nike Un-Heaven’s Gate SB too.

When dressy shoes just entered the scene around 2010 or 2011, some people started dropping sneakers, but not the loyal ones. Not the people who just rode on trends. The sneaker heads stayed. And fast forward to 2014, sneakers began dominating again. I honestly could attribute it to adidas brining back the Stan Smith design. But, that’s just me. And now, more stores are offering fashion-forward-slash-sporty shoes.

Last Thursday (March 17, 2016), I visited the reopening of The Athlete’s Foot branch in Two Parkade, Bonifacio Global City. It looked really different, if you ask me. You see, I always take a morning walk before work, and I always pass by that shop. It looked sad. I’m not kidding. If you would enter it, you would be reminded of the place where Michele from “Romy and Michele’s High School Reunion” worked for a short time. Scary! Okay, that was a bit of an exaggeration, but it had the same feel.

Now, it looks fresh, and makes you want to linger in the store longer. During the event, The Athlete’s Foot announced that they’re now repositioning to cater more towards the lifestyle segment. The brand will be housing more products that will cater to more fashion-forward Filipinos as they will continue to house brands such as Nike, adidas, New Balance, Asics and even Puma and Reebok Classics in the coming months. Excited! 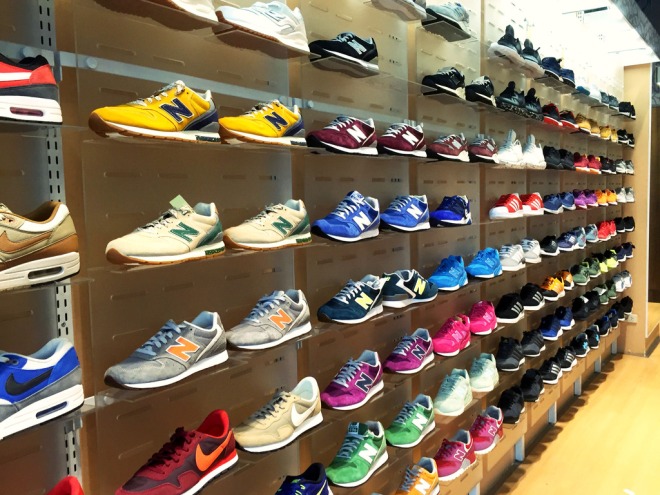 The shoe display looks so much better now than before. I went the day after to take photos because during the launch, there were people everywhere and I couldn’t get a nice shot. Going to the store was a bad idea because I was just tempted to shop! I was particularly eyeing the Red-and-Black Nike because it has been a long time since I last wore breds. Even the burgundy New Balance sneakers look nice, although I am not sure if I have anything in my close that would match it. Still! I want! 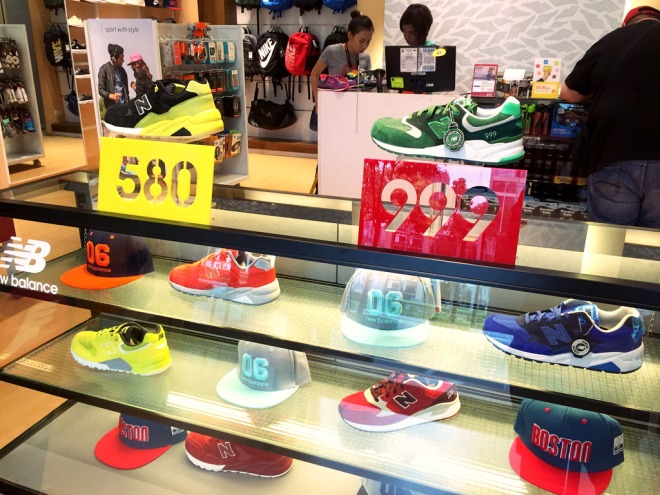 They had these New Balance shoes at the center of the newly opened and revamped store. And, no, the 580 and the 999 don’t mean that those are their costs. That’s just how the brand names its shoe models.

Anyway, I’m pretty excited with this move of The Athlete’s Foot–going towards the lifestyle segment. It’s just time for them to reach out to the slashers of the Metro; the people who are living active lifestyles who don’t want to sacrifice the look of their sneakers for its function. The brand will soon be giving a fresh look to all of its branches in the country, and will offer more fashion-forward yet functional footwear and apparel soon!

Sport With Style in The Athlete’s Foot