I decided to go around UP Diliman during my free time.

I left school around 12:20 and rode a jeep supposedly to go to UP…apparently, the jeep (there was a UP Campus-Katipunan sign, mind you!) wasn’t going to UP! Good thing I was able to go down and got another jeep which conveniently dropped me off in front one of the gates.

I walked around and called Ben to help me go to Bahay ng Alumni (I wanted to buy a slice of Devil’s Food Cake from Chocolate Kiss. Haha!)

I didn’t buy right at that moment though. Ben left and I opted to go around. I ate kwek kwek once I saw a street food vendor. Wished there was isaw, but they didn’t have any and during my trip, didn’t see any! 😦 Learned that isaw vendors arrive late-ish afternoon. Anyway, first order, and only order of business was to look for and suffocate hug one of my High School bestfriends.

I was so lost! as in MEGA lost! I walked around, asked for directions but fail. Decided to ride the Toki which I though would go outside the campus completely. Good thing it came back! HAHA! After like how long, finally got down by the College of Music and crossed the road to make it to Plaridel Hall. Saw Wacky then we walked to the UP Film Institute place because his classroom was there. 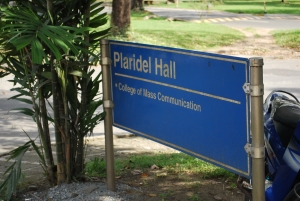 Too bad though that Wacky had class and couldn’t stay for long. Maybe next time I should bribe his prof to let him free for like an hour so we can go around or something.

I started walking around again and saw some fun stuff in UP! For example this bench thing which has some cute bars thingy. It would be nice to have something like this in Ateneo! Not something exactly like it, but something similar with some avant-garde design and a retractable “hood/ceiling” probably? 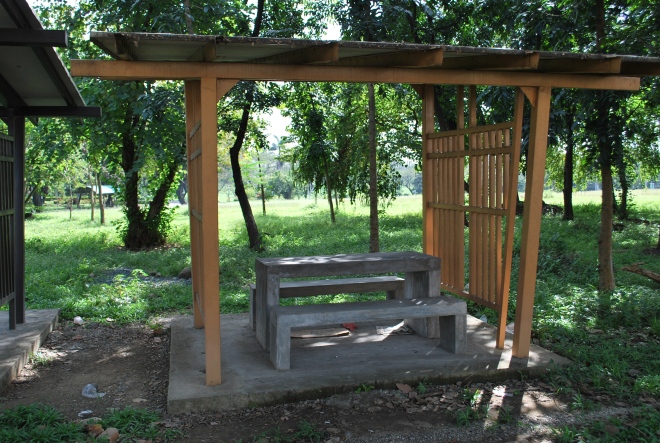 I found this trash can very cute and unique too! The chute looks like a chimney lang! Haha!

I also saw this cute thingy. Don’t know what it was exactly but it looks cute! And from this angle, it looks like some footwear or something. Haha! 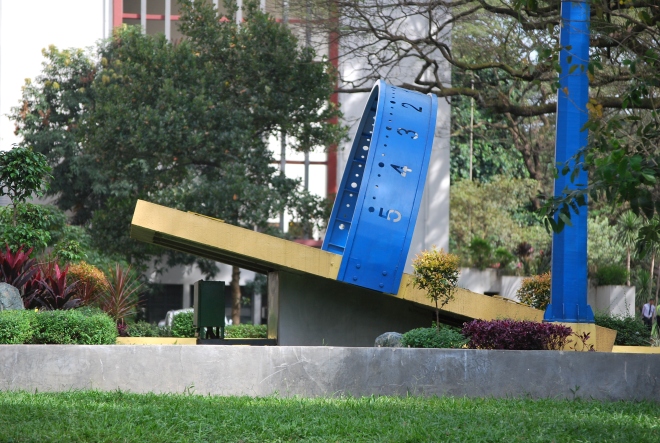 UP Ikot! Couldn’t find any Toki that was just parked so I decided to take a picture of the next best thing! Haha!

After going around, I decided to go to Bahay ng Alumni again to buy a slice of cake! On my way out, I saw the cool stained glass thing which I remember I took a picture of last year when some of my blockmates and I went there too.

Anyway, I guess that’s it for this entry. I also saw some other cute stuff but I shall save those for my next adventure. Haha! Probably it’ll be this coming Friday, but not too sure yet. SOON though 🙂

Random Trip to UP

4 thoughts on “Random Trip to UP”