During one of my Morning walks last week, I came across what seemed to be a new coffee shop named Passion by Gérard Dubois. I was curious, and I wanted to enter. However, I saw a sign which said that the restaurant was  still on some dry run, so I just took a video on Snapchat, then continued on with my walk. Gotta hit 10,000 steps a day after all! I was talking to my colleague about it, and we came back the day after.

Passion by Gérard Dubois wasn’t just a coffee shop, as I had initially thought. It’s a full blown café which offers a wide variety of savory and sweet food, ranging from pizza, casserole, salad, sandwiches, gelato, macarons, and so much more. A lot more! I haven’t been to Hong Kong in ages (I was supposed to last year for my birthday, but work prevented me from going. Still sad that I had to cancel my birthday trip. I digress.) so I wouldn’t have known that this is not a new concept whatsoever. This is the sixth branch of the brainchild of Dubois, the other five being located in Hong Kong and China. 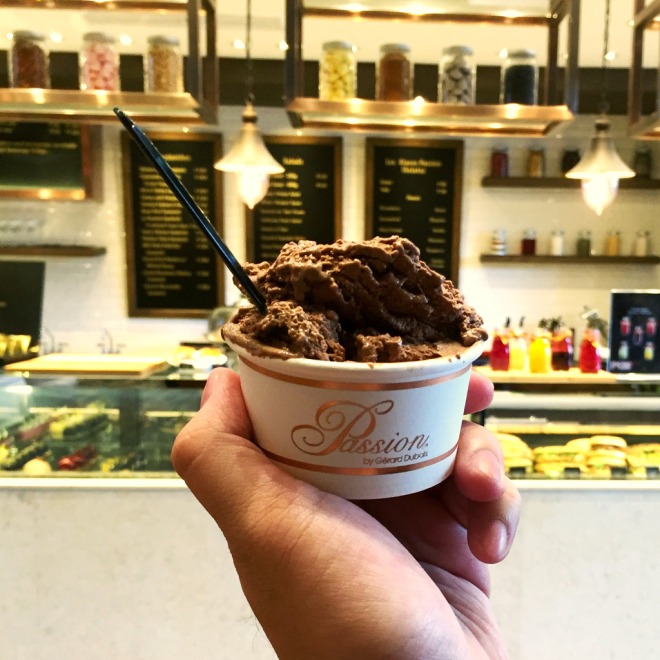 On my first trip, my colleague and I opted to get a gelato. It was extremely hot that day, we went there during the afternoon, and I wanted to cool off. Gelato sounded like a smart idea. One of the chefs explained that they source their ingredients only from the countries that offer the best—Bananas and coconuts from the Philippines, Valrhona Chocolate from France, so on. Was it good? It was delicious. Never mind if the way the presentation is not sexy, it had great flavor. That’s all that matters. My colleague and I took the moment to do some serious life talks, all while enjoying the ambience, and interiors.

We came back the day after with some more friend to try their savory offerings. Again, they had a lot to offer. It’s quite difficult to choose what to try if everything looked appetizing. If you also do a quick scan on what diners were eating, you would be left even more confused on what to order. Quiche? Sandwich? Sour dough pizza?

Another colleague of mine decided to order two different pizzas and have half-each. We got the delicious, flavorful, filling La Palette “Passion” Brie Cheese, and the equally scrumptious Chicken Tikka Sour Dough Pizza. Yum! We weren’t able to finish both because they look more filling than you’d think. 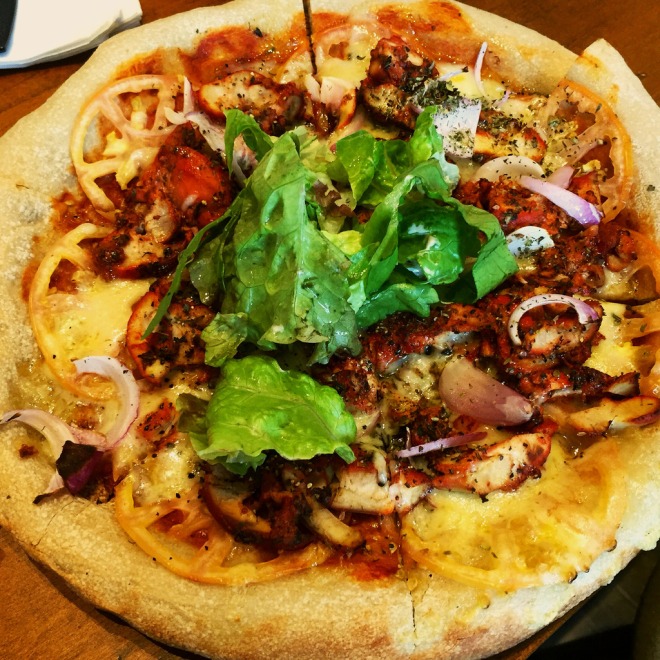 Our colleagues tried other dishes such as the Scone set, the Smoked Salmon Pizza, Crème Brûlée, and other things I couldn’t recall. Were we happy? Check our smiles below.

We were more than satisfied! Apart from the food, what’s notable would be how calm and collected the staff were amidst the chaos during lunchtime. People were just all over the place, looking for places to sit, asking everyone in a double-breasted jacket what they should order, what’s the café all about, etc. Hats off to the staff, they handled everything well considering they were only on their second day of operations.

I went back the day after. Yes, third day in the row. I spent a bit of the morning with a cup of Hot Valrhona Chocolate, while writing on my journal. It was pleasant early in the day. The place was already a bit full, but it was not as noisy as if you were to go there for lunch or for an afternoon snack.

I like Passion by Gérard Dubois. Must be the interiors, the staff, the food or maybe how new the café is. I don’t know, but I love it. It’s now officially a safe place much like Farmacy. Definitely will be coming back this week to try more of their offerings, and to take better photos. I only used my iPhone 6 for this entry. Have I mentioned that we met the Co-owner, Pamela Flores, and she was a peach! I’d do PR for her (well, for the café) pro bono just because I like it so much!

Should you wish to check it out, Passion by Gérard Dubois is located along 5th Avenue, to be exact, in NetPark in Bonifacio Global City. You could check them out on Facebook and Instagram.