I attended the fourth Heima Design Discussions, which is, in my opinion, one of the most refreshing and inspiring seminars I have attended. Initially only knowing Mara Coson and Marie Jamora, I didn’t know what to expect from the 4-hour session. I was only certain that I was craving to learn more about design, I was hoping to be inspired to get into the craft and develop skills, and I wanted to be surrounded by people whom I share the same interest with.

Having arrived at the venue 15 minutes before the expected time that the event would start, I decided to look at the Heima Brixton store. It was my first time in that branch and I can say that despite being situated in a different area from the Cubao Expo branch which I have been to, it managed to contain the same atmosphere. 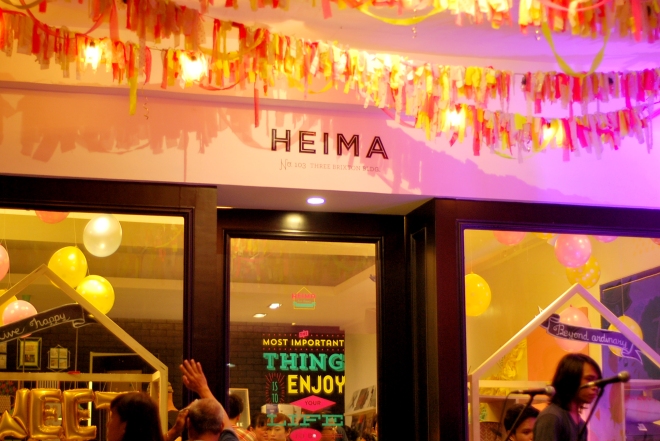 I was not able to capture the whole wall, but I tell you, whoever made it must be a genius. Every element was beautiful, quirky, and very true to the identity of the Heima Store . Heima is a home and lifestyle shop which sells home pieces—they can even do custom made designs—and a lot of other pieces that are interesting. They sell turntables, vinyl records, books related to interior design and art.

I brought my Moleskine planner and journal with me, as well as my pocket-sized MUJI notebook without rules. I kept myself entertained by doing my One-Day-One-Entry in my journal, and I doodled on my MUJI notebook. While waiting for the event to start, the orange wall with doodles and other designs caught my eye. I just had to take a photo.

The event began a bit after 1 with Homegrown introducing what Homegrown does. I am really interested with the nature of their venture; to inspire people with startups, to be an avenue for collaboration, and ultimately, to be an avenue that would help people achieve success. They discussed different ideas which all meshed together, from the idea of J.J. Abrams that “Mystery is the catalyst for imagination” to the idea of us belonging to “Generation C”.

Wander started by asking the crowd two questions: “Who here loves to travel?”, “Who here researches before they do their travels?” After hearing that opening line, I was hooked. They were sharing their plans on creating city guides for the country and they plan to launch it by June—in time for Independence Day. I have to agree that is a lack of city guides on our country. It’s even more embarrassing that I do not know a lot of things to do, places to go, and where to eat in Manila that is truly Filipino—sorry, I love Chinese and Japanese food!

Patrick Jamora—along with Rosario Herrera—from Status Magazine talked about the magazine and how the aesthetics have transformed since its first issue. Jamora shared what he has learned throughout his stay in Status and I agree with all of them. The point which stood out for me would be “Let Go and Let Odd” because I have had experiences in the past which could be summed up with that phrase. In a way, the phrase commands someone to accept that we can not always perfect things, and we have to take chances. A crucial part of this would be to learn from the experience in order to avoid or at least, to lessen mistakes. 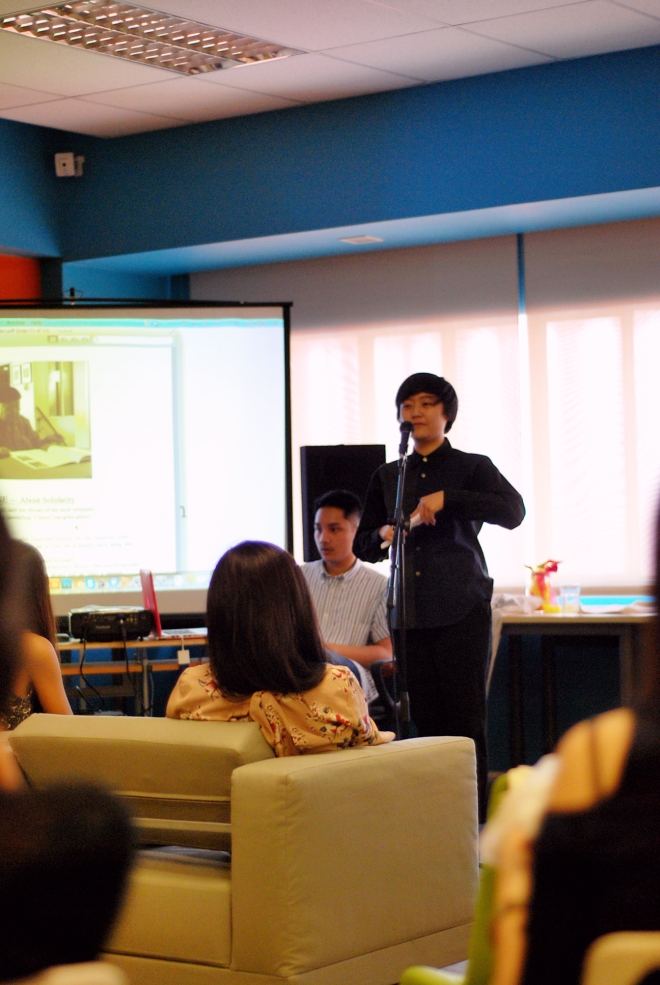 Mara Coson—with my Political Science professor Leloy Claudio—talked about The Manila Review which sir Leloy has mentioned in one of our classes before. Coson shared to the audience what The Manila Review aspires to do, and I particularly like when she mentioned even they are not absolutely certain on the direction of the publication. Admittedly, I have not read much articles from their ‘zine, but the ones I have read gave me the same feeling as I would when I read History/Political Science readings. Is it a bad sign? No. I absolutely enjoyed reading for those courses (but I hated the length of some articles we had to read for those courses).

IdKids followed and I personally enjoyed the informal feel that they brought. Some parts of their talk, I felt like I was in a Philosophy-Art class hybrid which I found insightful. Minimalist kitsch. The concept is just too big for me to explain so I won’t even attempt, but when Nice and Owel were describing it, I just had to stop taking down notes and just listen. The final quote they shared, “The final goal of all artistic activity is architecture” by Walter Gropius was quite big as well. In layman’s terms, it just means that every element, everything we do is just a fraction of the bigger picture we create; all of the pieces serve a role and the movement of each can affect how the big picture would be created. 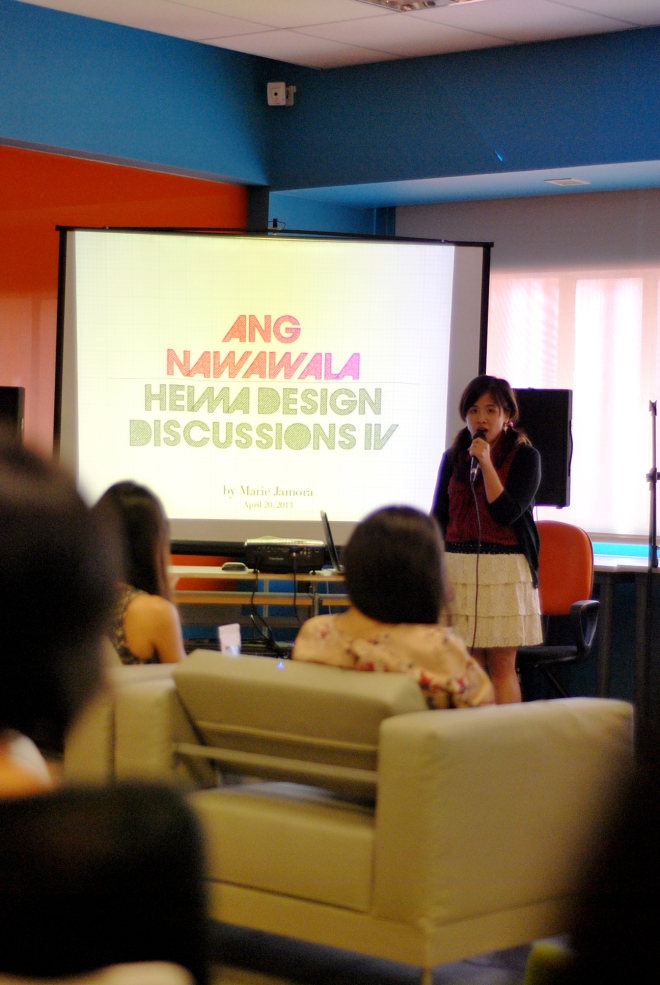 Ang Nawawala director, Marie Jamora, took us behind the scenes and even deeper into the film. Everyone present was amazed seeing how detailed things were which was evident through the character bios shown, the pegs for locations and such. Being able to hear from her made wish I took AB COM in Ateneo instead or at least took up the course she teaches in school. She also presented to us initial designs for the posters and souvenirs related to the film. She is really a genius.

The last speaker, and my favorite one, Isabel Gatuslao inspired me to practice Photoshop and Illustrator. Since I arrived home last night, I have been making random designs and I have been trying to further learn Illustrator. She is an identity designer and I enjoyed listening to her stories and her designs are inspired and divine. I haven’t met someone who is like her who gets into a design project so much as to do her own research, and presents just one option to a client. She exuded so much passion and she was also entertaining during her segment.

It’s safe to say that the Heima Design Discussions achieved what it wanted to because until now I’m still on a high thinking about my passion project. While there is my dream to have my own dot-com, I don’t think it’s big enough to consider a passion project. Somehow, I want to be able to connect my interest in photography, art and marketing/advertising/public relations and let the product be my passion project.

A BBQ party took place after which I attended along with my JTA blockmate, Pamcy (the hipster of the block). The night was awesome with good music, the right, fresh crowd, and the most trivial finds. Would I attend another event Heima will host? You bet! 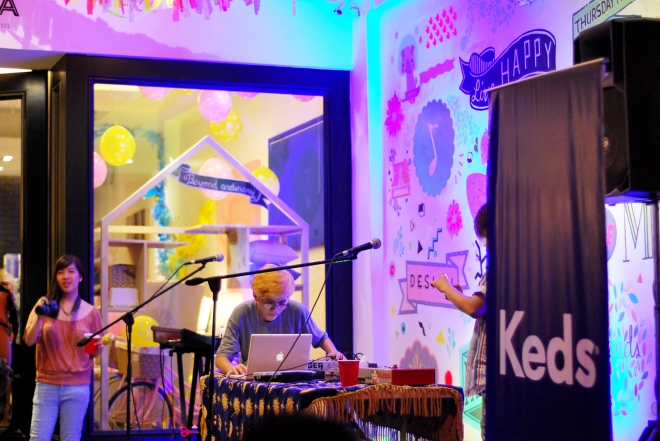 PS. Finally able to try Vanilla Cupcake bakery because Heima was giving away free cupcakes and I thought to myself it was the perfect opportunity to try it. It was delicious!