I can still remember that time when I was introduced to Starbucks. I was 9 or 10 years old and my parents were craving for something sweet after a Korean dinner with my dad’s friends. I can’t quite remember what I drank but I remember it was an iced drink. I remember I told myself I’ll never drink anything from Starbucks because I didn’t enjoy that one drink. I was introduced to frappuccinos a year after and ever since, I’ve been a fan.

I distinctly remember starting to shift from frappuccinos to actual coffee/latte/macchiato when all of my peers labeled themselves as coffee drinkers when in fact they would just drink mocha/chocolate/caramel/strawberries and cream frappuccinos. Haha! I even remember starting to collect for Starbucks planners even before planners became an in thing among my peers. And no, this is not my way of saying that I have started being a fan even before Starbucks and their planners became a thing.

This afternoon when my mom and I went to Shang, I passed by Starbucks to grab my mom and I a drink plus her favorite oatmeal cookie. The barista started talking about the Starbucks card–which I already knew about–but I still made him talk about it more because he was quite enthusiastic about it (that is something I love about Starbucks).

The barista presented me two options. I chose the one without the tea because it looks much cuter!

So what’s the deal about these cards? Well, it’s a loyalty card of sorts. Everytime you use your card as well to purchase a beverage, beans or VIA Ready Brews, you earn stars which can later on reward a card owner. Pretty exciting if you ask me! 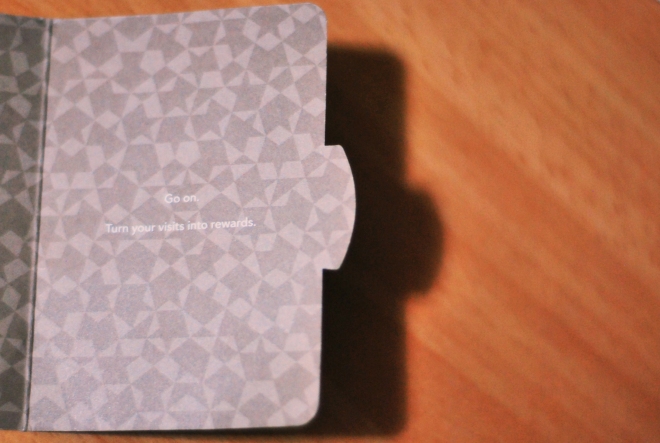 Although I don’t drink as much anymore, nor am I in need of a perfect place to study, Starbucks still remains as my go-to place when I feel like I need to escape from reality and just unwind. And lately, I’ve been needing a lot of that.

Let’s see though how it goes with this nifty card!

2 thoughts on “The Starbucks Card”